As wrote in the previous post about Laura Malinverni’s lecture in Genova (( see  here )) Renaissance astrology is  my favorite field of study, because we can see how real astrology 🙂 worked and how Hellenistic and Medieval techniques were applied in practice, included differences and interpretations of Sacred Astrological Texts.

The following is a letter from Antonio Magini, main chair of mathematics at Bologna University, astrologer (he elaborated before Placidus the house  system which goes under the latter’s name ((  John David North, Horoscopes and History. Warburg Institute University of London, 1986.)) )  and mathematician at the court Gonzaga in Mantua. The following is a letter written by Magini to the Duke Ferdinando of Mantua: evidently Ferdinando had asked an election for his coronation and the astrologer of the Court was searching the best date.

Below we show Ferdinando’s chart taken from another Italian astrologer, Andrea Argoli, who was one of Magini’s students.

This is the same chart in a modern format.

It’s interesting to notice in the following lines that:

The election is the following:

It is not propitious for the Coronation of Y.E. neither the feasts of Whit Sunday or that of Our Lady in August; because during the Pentecost (( 26 May 1613 ))  Jupiter is exactly on the place of radix Mars all those days. 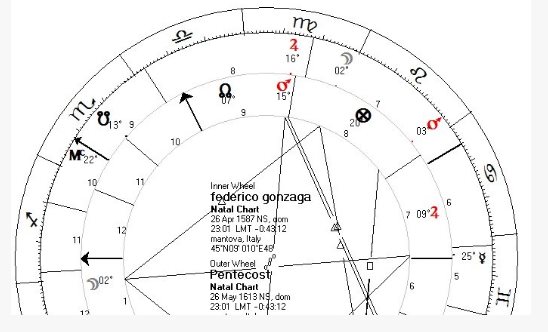 And, for the feast of the Assumption in August, even if Mars will be removed by Mars radix position, there are other negative factors: because the Moon in the days of 15th, 16th and 17th (of August) will be in conjunction with the Sun, or at lest under its beams, but worse is that  Mars is doing its return to its radix place coming by body to Jupiter, Ascendant ruler, which joins on the 26th while Saturn is opposite to both for several days, and so I judge the days from the middle until the end of August very unfavorable for Y.E..

On September 8th, the day of  the Holy Virgin, the Sun is on the radical Mars, which makes that day and some days before and after very unfavorable. On the contrary I will judge  very good St. Francis Day on October 4th, which is the most important feast in Mantua, when the Sun is with Jupiter, both trining the Moon, and the most convenient time will be a little earlier than midday. 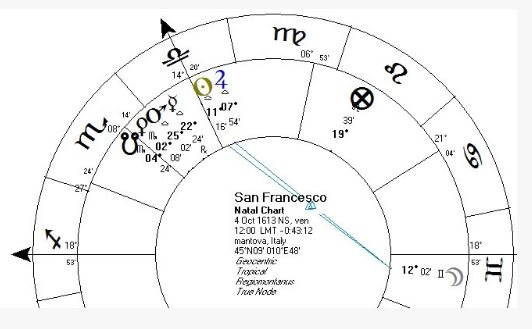 If Y.E. does not wish to wait so long, I cannot be unhappy if You would take advantage of the last day of June, which is Sunday, when the Sun with Venus is in Jupiter radical place, and the Moon at the Ascendant, and by then Jupiter will be moved  from Mars three degrees. The most favorable  time will be one hour and a half before noon, when Jupiter would be at the Ascendant.

Written by Margherita Fiorello, CIDA certified member, for heaven astrolabe blog @ year 2012. If you want to be notified the next time I write something, subscribe to my RSS feed.