Astrology is not an archetype as many tend to think, but rather it is a model of the sky which is transmigrated from place to place, adapted to the local cultures, improved, enriched from the multicultural mix, it is in a word like a living being.

This idea is not new, it is well known inside academies, but not so between astrologers, in part because of the modern idea of “archetype”, in part because cultural barriers and impossibility to face the fact that the Mediterranean sea was in the Antiquity the real centre and core of the world. 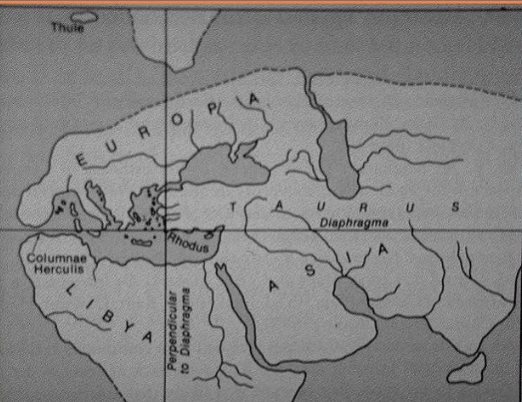 David Pingree shortly told the whole story (( David Pingree,“The Indian Iconography of the Decans and Horâs.” Journal of the Warburg and Courtauld Institutes 26, no. 3/4 (1963): 223–254. )) focusing on the passage from Greek to Indian decans and deities: for example for Virgo, the Isis Pelagia  became for Indians a girl with a torch on a boat.

Obviously there are more than one evidence that Indian astrology came in contact and absorbed from Hellenistic astrology, but one of the more astonishing ones is for me the chapter about ascensions in Varahamihira’s Brihat Jataka.
Varahamihira was the most famous Indian astrologer, lived between 505 and 585 and worked in Ujjain, and thanks to him the mathematical school there became very important.

In the first book of  his Brihat Jataka he writes:

What these mana are?

Vettius Valens is less dark and enigmatic about them and explains how to calculate them:

How does Valens obtain these times? Very easily!

Each couple of opposite signs takes 60 times, so Libra will have 60-20 Aries= 40.
If I subtract the greater from the smaller, we have 40-20=20 which I should distribute between the remaining 5 signs of a zodiac half  (the other as we have seen it is specular). In practice 40/5=4 which I should add to the signs.
If Aries is 20 Taurus will be 20+4=24, Gemini 24+4= 28 and so on….
These are the wonderful Varahamihira’s mana, exactly correspondent to Vettius Valens’ ascensional times.

Unfortunately for Varahimihira mana, ie ascensional times, vary depending on Klima, the latitude.  Valens obviously used the Hellenist ones, because he was an Hellenistic astrologer, but what about Varahamihira?  Obviously he cannot know Babylon, which was kept by Alexander the Great 🙂 and moreover he lived in a place with a latitude of 23  – Babylon has a latitude of 32, so the ascensional times are completely different.

What happened is that Varahamihira took his data from an ancient Hellenistic text, which was obviously common in India considering all the evidences scattered in Indian texts. It’s just another case of transmission of astrology between Greece and India, that’s all 🙂

Written by Margherita Fiorello, CIDA certified member, for heaven astrolabe blog @ year 2012. If you want to be notified the next time I write something, subscribe to my RSS feed.

2 thoughts on “The Hellenistic/Vedic case for ascensions”