from a talk given at the Italian Astrological Congress

LIFE PATHS FROM  A MODERN AND TRADITIONAL ASTROLOGICAL PERSPECTIVE

The determination of work and profession is one of the most difficult chapter of Tetrabiblos, maybe of all traditional astrology especially when it concerns activities Greeks could never imagine like travelling in space as Neil Armstrong. Anyway traditional astrology works even when we don’t have any text which can supports us, as we will see.

This is Neil Armstrong’s birth chart. Armstrong was the very famous cosmonaut, the first man to put his foot on the Moon. (1)

WORKING METHOD
Before looking at the birth chart and considering this is not a Congress focused on traditional astrology, we should spend some words about our working method. This is not a mystery chart, someone’s blind chart we don’t know anything about, but a VIP’s chart we know life, work, physical appearance, death. We will work backwards, but with the necessity to set some points in advance if we don’t want proceed blindly and without any result.  This is the gist of the story in fact: does traditional astrology work in a modern context? Very important point I guess, because if traditional astrology does not work it is useless to spend our time with it.

Modern astrologers will be surprised we will never mention either the solar sign or myths and archetypes- in fact these tools don’t belong to the field of traditional astrology.

Starting from the 80/90’s  a very big work of translation of texts translated into modern language has been brought forward, both in Italy by Prof. Bezza and in the English speaking context;  we have so many ancient texts at our disposal in a modern language making immediate and within everyone’s reach what is truly ancient and what is not . Chris Warnock writes on his blog << Thus the reason for not using techniques that are modern or used in a modern way is almost tautological. Traditional astrology uses only traditional astrological techniques because otherwise it would not be traditional astrology.>>(2).  It would be obvious, but sometimes it seems to me  it is not so 🙂 We can briefly say that the zodiac sign – you are Gemini, I’m Cancer, let’s marry- was introduced at the end of 19th century, both in order to sell more magazines and almanacs and on the wave of theosophical thought, while myths (that clearly belong to the classical culture in general) have no mention in any of the numerous texts that came down to us, among many reasons one for all that Hellenistic astrology is not Greek at all, but a mixture from many cultures and there is no reason localized cultural myths should be used. In fact, no one ever uses them. Similarly, this work does not consider the study of the entire birth chart, both for reasons of time, but also because the ancient astrology proceeds to areas, and each topic has its own significator, it is useless to rattle off a whole astrological routine as we do with Ave Maria if we only talk about one topic.

What we’ll do on the other hand is searching in Neil Armstrong’s chart whatever we expect to find after having read traditional texts and see if we can find what we want.

Before starting a discussion of the profession and activity, it is interesting to note that Armstrong is not only an astronaut, that in itself is a quite unusual work, but it is an icon of our time. Everybody remembers his words “one small step for man, one giant leap for mankind” and all those who were adult enough were in front the TV, watching at his walk on the Moon, which marked not only the victory of the USA on the USSR in the space race, but also inspired artists, writers and painters. We expect to find in a few words in his chart what a Greek astrologer would call the excellence of the birth, the X factor in a chart of those who distinguished themselves in society. This technique is based on the fundamental distinction between day and night which is peculiar to the Hellenistic astrology. Intuitively, the Sun is the luminary of the day and the Moon is  the luminary of the night. All other planets are divided into two sects or factions, between day and night. Each side, each of the two portions of time it wants a benefic and a malefic planet. To the sect of the day led by Sun belong Jupiter (benefic) and Saturn (malefic), to the sect of the night led by the Moon belong Venus (benefic) and Mars (malefic). Mercury is psychopomp 🙂 and changes according to its position and authors.

– Lights are angular in masculine signs (the Sun in Leo at IC and the Moon in VII in Sagittarius );

– Jupiter is a spear bearer to the Sun from Cancer, the sign preceding the Sun;

-Venus ( and Saturn ) are spear bearers to the Moon, in the following sign, Capricorn. Saturn ( “out-of-sect” because it is a diurnal planet daytime testimonies the Moon ) from Capricorn. Venus is in Virgo, is spear bearer to the Moon by trine.

– Spear bearers are all in their dignity because Jupiter is in its exaltation in Cancer ; Saturn is in its domicile in Capricorn and Venus in her triplicity .

Persuaded that whatever Hellenistic astrologer would have predicted to Neil Armstrong a very bright future we are going to investigate the profession, which is the object of our research. After having scrolled texts we had a certain expectation about a couple of significators.

Firstly , we expect Mercury wil be highlighted, because Mercury is a general significator of all activities related to the SKY. Writes  Firmicus Maternus, but we could find a million quotes and references:

Those who have Mercury as ruler of the chart…. and he himself or Jupiter are in one of the angles… this will make men dedicated to certain religious rites, knowledgeable in secrets of magic, astrologers, astronomers, haruspices; they seek the secrets of all religions and of the heaven itself. (4)

But I like to dare and I’m expecting something else, Saturn as a general significator of navigation.

The astro- naut word in all languages ​​can be divided into astro & naut. But if this is not enough Armstrong WAS A SAILOR . From WIKIPEDIA:

Before becoming an astronaut, Armstrong was an officer in the U.S. Navy and served in the Korean War.

Saturn is always mentioned as a natural significator of ships and navigation. Durer ‘s famous engraving Melancholia, which collects several aspects of Saturn puts the ocean with the ship as a background of the angel with the bowed head. (5)

The same symbols appear in a 1979 movie, Nosferatu the Prince of the Night, which in the same way of Durer’s engraving, collects several saturnine symbols: mice , the ship, the plague, the vampire.

With this background/hope we are going to give another look to Neil Armstrong’s chart.

Many Hellenistic authors limit the choice of indicators of profession to Mercury, Venus and Mars because they are the faster planets, move quickly from a sign to another, and in a few words are those better differentiating natives, often peers. On the other hand slower planets are generational, and cannot give any personal indication because all those born in a given period will have the same planet in the same sign, or worse in the same degree.

The choice of a significator cannot be arbitrary, but it must meet certain conditions, which we summarize below. Conditions are very narrow and there are many cases it is impossible to find any result.

The significator of the activity is  the one of the fastest planets – Mercury, Venus or Mars which:

– is making its heliacal rising (it moves from the conjunction to the Sun and emerges from the rays of the Sun itself becoming visible because the sun all dazzles, ça va )
– rules the MC or is in tenth or in a house configured to the 10th;
– receives the applicative aspect of the Moon;
if these conditions are not met the native works without any vocation

-rules the Gemini ASC and is its domicile /exaltation in Virgo )

-is angular in IV

-is doing its heliacal rising (6)

– receives the application of the Moon, ie the Moon is going to apply to Mercury. 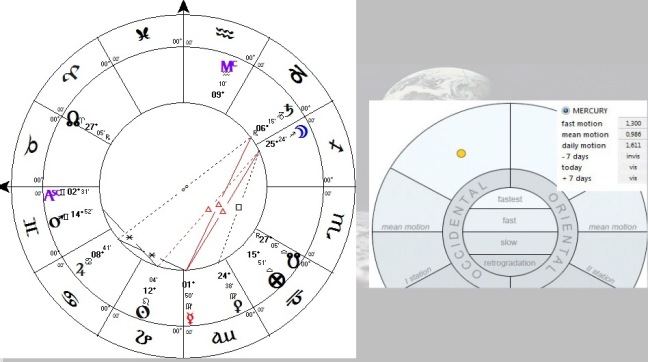 Saturn at MC……. or with the Moon at DSC makes sailors.

In this chart Saturn is not at MC but rules it ( the MC is in Aquarius ) and is joined to the Moon, which is in the 7th house .

Did the techniques that we have derived from Ptolemy, Paul of Alexandria and Rhetorius the Egyptian work for Neil Armstrong, a man born in 1930 , almost two thousand years after these astrologers ? We think so, yes.

One thought on “Profession and traditional astrology: Neil Armstrong”