About Caterina de Medici’s husband, it is well know the prognostication Luca Gaurico made for him.

“Travels by water are inaspicious and accidents with horses and tears from the left eye.”

While in his Tractatus, Gaurico mentions the wonderful stellium of Sun (in his exaltation), Venus and Moon  at the Ascendant, which would influence countries under Aries.  In effect Moon was in Sagittarius, not in Aries- Cardano immediately caught his enemy’s mistake.

Still the prediction remained true: in 1559 King Henry was mortally wounded  to the eye by  a lance  during a tournament.

The black legend about Caterina de Medici depicts her as a wicked woman, adept to black magic and every kind of sorcery in order to keep the power and the throne, and i found this story in several astrological sites too.

END_OF_DOCUMENT_TOKEN_TO_BE_REPLACED

Augustus, this Dome whose vault touches the stars and is so similar to the sky, nevertheless is inferior to his Lord.
(Martial, Ephigrams VIII, 36)

When I wrote my thesis about “manifestations of luxury in Renaissance Italian buildings” some years ago, a subject very uncommon in my Faculty, I could not know that some years later I would write again about under a very different point of view, the astrological one.

I have been always believed that “destiny carries the willing man; the man who is unwilling it drags” so I was not surprised at all when many years after – with someone I could never imagine- I arrived in a small town near Rome, in the summer residence of the Farnese family, an important Italian family of Renaissance.

THE PALACE IN CAPRAROLA

In 1504 Alessandro Farnese senior, an aristocrat coming from central Italy and a descendant from the ancient Caetani family, bought the whole area of Caprarola, a small town near Rome, that its strategical position and the healthy climate made a perfect place both for summer residence and headquarters for the land Farnese owned in the near area.

The Palace had been started on a pentagonal plan by an expert military engineer, Antonio da Sangallo the Younger, on a hilltop near Lake Vico:  works started on 1520 and were interrupted around 1534 when Alessandro Farnese became Pope with the name of Paul III; after his death his grandson Alessandro junior designed another famous architect, Jacopo Vignola, to complete the villa. The new architect transformed the original plan and turned the fortress in a luxury palace, with the help of the most famous artists of his time,  like Zuccari brothers, Giovanni Antonio Vanosino, Raffaellino da Reggio. 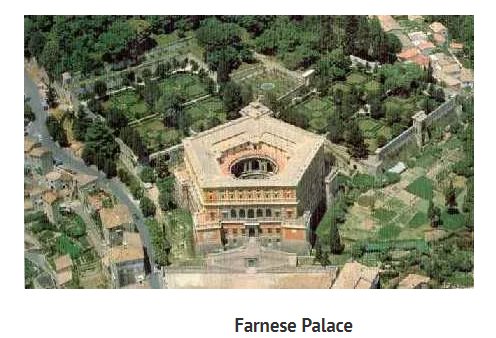 The end of 1400 and the beginning of the following century was a very important moment for astrology and the invention of the printing press made possible the diffusion of astrological works by both contemporary and classical astrologers like Manilius (“rediscovered” in 1416 by Poggio Bracciolini in a Swiss convent), Hyginus and Firmicus.

Paul III had many personal reasons to trust this Art because one of the most important Italian astrologers, Luca Gaurico, had foreseen his election many years before, when Alessandro was just a noble from a small town, of restless temperament and uncertain faith (on the other side he was very learned) who succeeded in becoming a cardinal more for the beauty of his sister Giulia the Beautiful, fondly loved by the Pope Alexander VI, than because his religious ardour.